Available now to "Watch Instantly" on Netflix, here are three classics of a bygone genre born at the odd intersection of an emerging working class identity, the character based cinema of the 70's, and the sudden fascination with a communication technology called the C.B.  Some notable actors, writers and directors were caught up in the momentum of the "Trucker" movie, including Alan Arkin, Terrance Malick, Johnathan Demme, and Sam Peckinpah.  If you're searching for trucker some trucker action beyond these three iconic titles, there are similar titles available instantly in the same vein, including the 1978 Peter Fonda/Jerry Reed flick High-Ballin', and 1979's  Flatbed Annie and Sweetiepie:  Lady Truckers, directed by Robert Greenwald.  Greenwald would go on to helm the camp classic Xanadu (1980) as well as one of the most indelible TV-movie events of the mid-80's, The Burning Bed (1984), but is probably most recognized as the head of Brave New Films and the director of short-form political docs that distilled the Michael Moore format into a less personality-based style, giving us the "living room screening" movement of the last decade with films like Unprecedented:  The 2000 Presidential Election (2002), Uncovered:  The War on Iraq (2004), and Wal-Mart:  The High Cost of Low Prices (2005), among others. 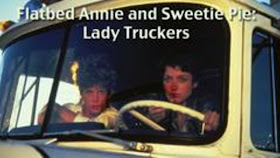 Aside from the excitement that comes with following a cinephile's path back into the dark heart of this rather treacherous cinematic fad, where one will discover a number of capable actors, writers, and directors embroiled in what is surely not their finest work, I can confidently say that the following films are a joy to watch, each with their own unique tone and fascinating shortcomings.  In their best moments, they reach for something way beyond what I imagine the majority of the audience expected from a movie about big rig outlaws outsmarting the fuzz and getting the girl in the end (or, in the case of Charles Napier in Citizen's Band, getting both girls!).  Occasionally, these films shine a revealing light on a transitional period in cinema, particularly in the late 70's films, where you can sense the scriptwriters and editors in tension with the themes and stylistic innovations of the late 60's and early 70's Hollywood renaissance and the impending doom of the 80's. 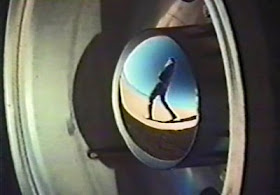 Scripted by a young, pre-Badlands Terrance Malick, this episodic, crazed trucker flick could be called The Tree of Life of trucker movies.  One has to wonder what it would have come out like if Malick had directed, rather than the future screenwriter of Teen Witch.  Deadhead Miles has no shortage of what you would expect from a trucker movie:  bennies, road-whores, flare gun hijackings, an array of catchy trucker themed songs with titles like "White Line Fever"...Loretta Switt.  But, the most notable aspect of Deadhead Miles is it's lead performance by Alan Arkin, who affects an absurd southern accent that he adheres to with varying degrees of commitment.  Along the way he picks up a hitchhiker, played by character actor Paul Benedict with what I can only describe as an utter lack of commitment, tempered by a quiet confusion.  Part of the joy of watching Deadhead Miles is watching Benedict fail to come up with any appropriate reaction to Arkin's ramblings, which even Arkin seems confused by at times.  Arkin's performance and the film experience some fairly wild shifts in tone, but even in the scenes where nothing works, in a picture that is essentially plot-less, it somehow remains highly watchable.  A number of familiar faces pop up, including Charles Durning, Richard Keil, Hector Elizando, and Apocalypse Now scribe John Milius. 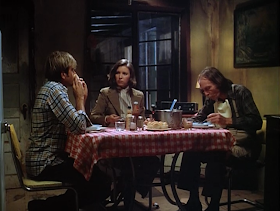 Heavier on the communications than the convoy, Citizen's Band takes it's moniker from the craze that was sweeping the nation at the time, the C.B.  What results is an admirably thoughtful screenplay that follows a character who goes by the handle of Spider (Paul LeMat) and his simultaneous attempts to clean up the local C.B. culture, and his relationship with his aging father.  LeMat's character proclaims early in the film that he plans to clean up the airwaves by "kicking ass," but the film turns out to be much less of a brawler than your typical Burt Reynolds movie, and ultimately emerges as a lesser Altman-esque attempt to juggle a number of characters with a plot that conveniently unifies everyone through the film's hokey climax.  Much of Citizen's Band involves the drama between Spider and his father (handle:  Papa Thermodyne), played with surprising depth by a character actor we unfortunately lost this year, Roberts Blossom.  Blossom manages the most engaging and thoughtful performance in the film, dour and lifeless in communication with his son, but suddenly brought to life by any communication on the C.B ("Keep the dirty side down and the shiny side up!").  The film struggles with stylistic touches, employing a series of still frame transitions that look dated, but, as I noted earlier, seem to mark the transitional character of film style in the late 70's.  Director Johnathan Demme would go on to helm the rock docs Stop Making Sense (1984) and Neil Young:  Heart of Gold (2006), and win the Academy Award for Best Picture in 1991 with The Silence of the Lambs. 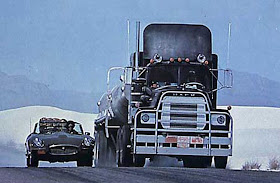 I was once fortunate enough to spend an afternoon picking the brain of David Weddle, the author of "If They Move...Kill 'Em!:  The Life and Times of Sam Peckinpah" (as well as a number of Battlestar Galactica episodes), who tried to convince me that Peckinpah was a more adept and important film maker than Sergio Leone.  I still think it's a close call to this day, considering Peckinpah's failures, but Weddle's dedication to the man, evidenced in his comprehensive biography, certainly impressed me and was a catalyst for me to reassess Peckinpah's work.  In doing so, I focused on the core of Peckinpah's successes, from 1962's Ride the High Country to one of the most intimate collaborations ever achieved with the late, great Warren Oates, 1974's Bring Me the Head of Alfredo Garcia. 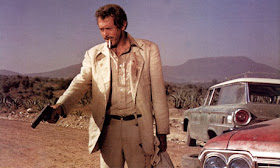 But, I had always steered clear of the fabled and disastrous late 70's and early 80's Peckinpah endeavors like The Killer Elite (1975), The Osterman Weekend (1983), and Convoy (1978).  It's a difficult thing to witness a director capable of films as affecting as The Wild Bunch (1969) and Straw Dogs (1971) bow to both a passing fad and the bottle, but fortunately Convoy doesn't come off as the work of a completely fallen hero.  Rather, it's an occassionally fascinating reflection on Peckinpah and his struggle to bring any kind of depth to the proceedings.  If Convoy fails, it may ultimately be for one of two reasons:  1) Peckinpah seems to truly want to bring depth to a film based on a novelty song, or 2) Ali McGraw.  I hesitate to cast such a negative light on a particular actor, but not only does McGraw do nothing interesting in the film, but the inclusion of her character at all seems to hinder the film drastically.  The fact that the film conveniently avoids the dire finality of early 70's motor-head cinema like Vanishing Point is interesting, and perhaps exactly where Peckinpah might have gone had he followed through with the project.  Sadly, the film became the highest grossing of his career, and the least representative of his impeccable style.